Call for papers for Tetsugaku vol.7

Call for Papers: Special Issue of Tetsugaku – International Journal of the Philosophical Association of Japan on “Philosophical Practice”

Tetsugaku – International Journal (e-journal) of the Philosophical Association of Japan, calls for papers for the special issue, “Philosophical Practice” (Vol.7, 2023)

In Japan, the term “Philosophical Practice” is used as an umbrella term based on Matthew Lipman’s Philosophy for/with Children (1970s) in conjunction with Gerd Achenbach’s Philosophical Counseling (1980s) and Marc Sautet’s Socrates Cafe (1990s). They are activities that have different historical roots, theoretical background and aims, but what they share in common is that all of them are focusing on non-experts’ engagement in philosophical activity.

What is philosophical practice and what is not?

Who is the philosophical practice for?

Can non-academic philosophers or children do philosophy?

In what sense can philosophical practice produce a caring and therapeutic effect?

What is the meaning of the professionality of philosopher and/or philosophical practitioner?

What is the ethics of philosophical practice?

What are the roles of academic philosophers in a philosophical inquiry?

What is the relationship between dialogue and philosophy?

How can philosophy of dialogue relate to philosophical dialogue?

How can/should philosophy contribute to education?

Can philosophical practice take up the voices of the minorities?

Is philosophical practice possible in an unusual and/or deeply divided situation?

What is the mission of philosophical practice in global society?

What is the role of philosophical practice amid catastrophes, pandemic, and Anthropocene?

To submit your paper, please carefully read our Guidelines for Contributors.

Submission guidelines are available at https://philosophy-japan.org/en/international_journal/guideline-2/

“Catastrophe” has ceased to be an object of speculative concern about the end of the world, and instead concerns such events that we witness in our ordinary life and on a worldwide scale, from natural disasters such as earthquakes, drought or inundations, to industrial disasters or other types of crises like the pandemic, climate change, etc. What kind of philosophical reflections are possible for, or required by these events? How can we, warn, prevent, or at least understand such risks? Or should we start by asking “what is Catastrophe itself”? On the other hand, we may say without exaggeration that the history of philosophy is not unrelated to these concerns. Modern western philosophy is said to have begun with the Lisbon Earthquake (1755). From then on, revolutions, exile, world war, extermination camps and nuclear disasters constantly appear throughout the books of philosophers, without even mentioning the “end” inevitable for every one — “death”. We have already some reflections of a Philosophy of “Auschwitz”, or of “Hiroshima” or of “Fukushima”, but now, with COVID-19, it might be no longer be necessary to specify a location and a time, since catastrophe can come anywhere and anytime, Furthermore, it is probable that technological innovation, especially AI and tele-technology, adds some new aspects to what we used to call Catastrophe. Based on this recognition, our special issue seeks to bring forward new understandings and new approaches to the topic of catastrophe. How can we evaluate the concept of catastrophe and other related notions, such as disaster, accident, risk? What can we learn from philosophers on these topics? What is the role of human beings in the age of catastrophes? What kind of philosophical reflections is to be made on concrete catastrophic events? The themes that this special issue covers are as follows (non-exhaustive):

[Deadline: 30 November 2021] To submit your paper, please read carefully our Guidelines for Contributors.

Furthermore, philosophical concerns around care are cast not just against medical care but also against care given during/after disasters, war, industrial and economical restructuring, technology, and any forms of threats which deprive opportunity or capacity to people to decide their own course of life. Thus, the special issue covers the following themes (non-exhaustive):

[Deadline: 6 December 2020] To submit your paper, please read carefully our Guidelines for Contributors.

Analytic Asian Philosophy is the emerging filed of philosophy that tries to shed fresh light on Asian philosophy, classical and modern, from perspectives of analytic and other contemporary philosophy, and to create novel philosophical views on the world and ourselves in the age of globalization. It was pioneered by, among others, B. K. Mathilal, an Indian philosopher who attended Quine’s classes when he was educated at Harvard, and much discussed with P. F. Strawson and Dummett when he taught at Oxford. M. Siderits, T. Tillemans, J. Garfield and G. Priest are among present-day leading figures of this field. A number of Asian philosophers of new generation, who were trained in the Anglophone institutions, are following their initiatives. Some of those philosophers have been occasionally applying contemporary logic, classical or non-classical, to make sense Asian thoughts that had appeared to be irrational or even non-sensual. Asian philosophical traditions to be reinterpreted or reconstructed include Hinduism, Buddhism, theravāda or mahayāna, Chinese philosophy such as Confucianism and Daoism, and the Kyoto school of philosophy. This special issue is one of the world’s earliest attempts to feature such innovative topic, expecting the following themes as its main target subjects.

– Reinterpretations of Asian philosophy in its broadest sense, historical or contemporary, from perspectives of analytic and other contemporary philosophy – Original works on various philosophical issues in the analytic style in the broadest sense, that are inspired by Asian philosophy – Contemporary logical reconstruction of Asian logic such as Indian or Buddhistic one – Contemporary linguistic reinterpretation of Asian theories of languages such as Indian grammatical traditions – [Deadline: 30 November 2019] To submit your paper, please read carefully our Guidelines for Contributors.

In Japan, the field of philosophy was established in the second half of the 19th century, alongside the assimilation of Western philosophy. The development of this new field, however, did not mean a discontinuation with the scholarship and thought of the pre-Meiji period. Rather, Japanese philosophy developed through taking up traditions such as Confucianism and Buddhism and reflecting on them in a critical manner. It is not possible to specify exactly when the field bearing the title of Japanese Philosophy (Nihon Tetsugaku) appeared, however Nishida Kitarō, the leading figure of the Kyoto school, wrote in 1944 that: “I hope that in respect to philosophy, Japan will in the future manage to develop a grand Japanese philosophy.” From the war years onwards, research in Japanese philosophy has been closely tied to the thinking of the Kyoto School. However, this still young academic field has enjoyed significant growth in recent years, particularly abroad. Today, we see the development of a variety of approaches, as well as an increasing amount of research focusing on topics other than the Kyoto School. In this special issue, we wish to highlight this energetic global academic environment for research in Japanese philosophy, drawing attention to some of the latest work that is now taking place. Please consider submitting papers which engage in the following topics: 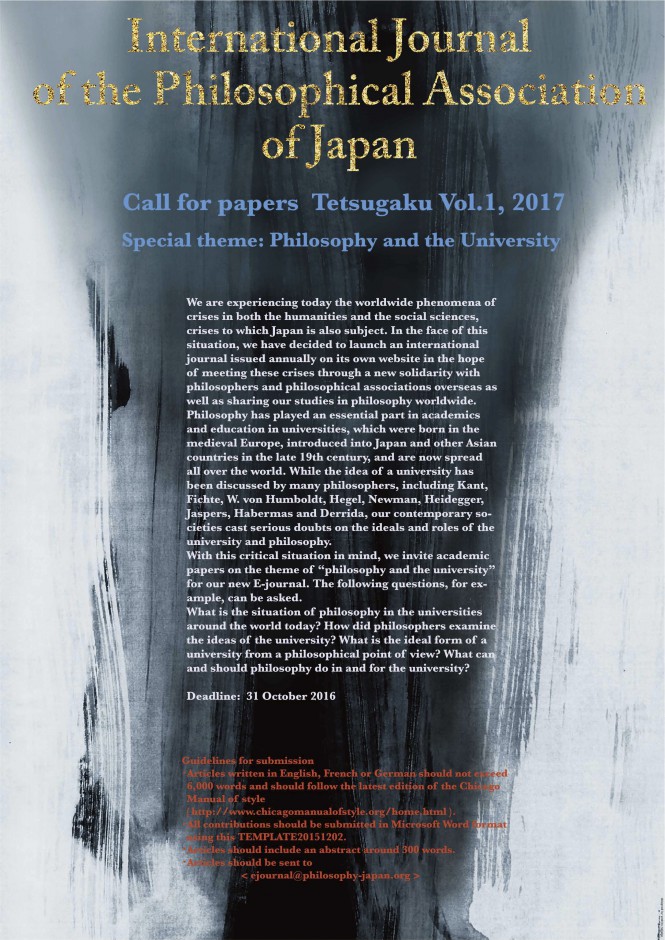